Wayne Couzens, 48, appeared at Westminster Magistrates Court on Saturday for his first hearing. He has been remanded in custody and will next appear in court at the Old Bailey in London on March 16, according to Met Police.
Everard disappeared on March 3 while walking in Clapham, south London, prompting an extensive police search in the area.
Her remains were eventually found more than 50 miles from where she was last seen. A post-mortem examination will now take place on Everard’s remains.
Couzens, a police constable whose “primary role was uniformed patrol duties of diplomatic premises,” was arrested in Kent on Tuesday. He was charged on Friday, according to a statement from Rosemary Ainslie, the CPS’ head of special crime.
Read More
The Independent Office for Police Conduct, a police watchdog agency, said in a statement on Thursday that it had started an independent investigation into police actions involving the suspect. 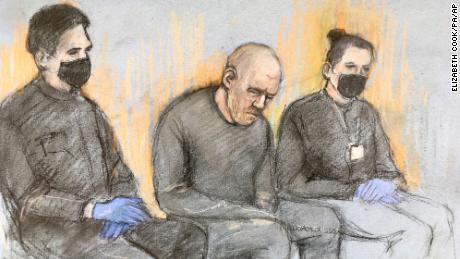 Everard’s disappearance has prompted thousands of women to share their own experiences of intimidation or harassment while walking alone at night across the country — and around the world.
Many also exchanged notes on the habitual precautions they take to try to stay safe when they walk alone — like clutching keys between their knuckles, pretending to talk to someone on the phone, or not wearing headphones at night — and voiced their anger and frustration that it feels like a necessary step.
Catherine, the Duchess of Cambridge, remembers what it felt like to walk around London at night before she got married, a royal source said. The duchess made a private visit to the memorial for Everard in Clapham on Saturday, the source said. She wanted to pay her respects to Everard and her family.
In a statement on Friday, the Met said that in “the interests of clarity about these exceptional events,” it was releasing further details of Couzens’ employment with the force. 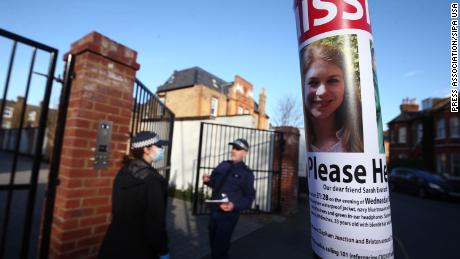 Sarah Everard case prompts outpouring from women sharing stories of abuse and harassment on UK streets
Couzens joined the Met in September 2018 and was posted to a response team covering the Bromley area in southeast London. He then moved to the Parliamentary and Diplomatic Protection Command in February 2020, where his “primary role was on uniformed patrol duties of diplomatic premises, mainly a range of Embassies,” the Met statement said.
Nick Ephgrave, assistant commissioner of the Metropolitan Police, said on Friday that he understood that “women in London and the wider public, particularly those in the area where Sarah went missing, will be worried and may well be feeling frightened,” and that Londoners could expect to see a rise in officers on the streets in the coming days.
“I know that the public feels hurt and angry about what has happened. And those are sentiments that I share personally, and I know my colleagues here at Scotland Yard and across the Met share as well,” Ephgrave said.

A series of vigils had been planned Saturday across the country, but the “Reclaim These Streets” events were canceled after London Police said the Clapham vigil couldn’t go ahead, citing coronavirus restrictions, the organizers said in a statement Saturday.
A large crowd of mourners gathered for hours Saturday evening anyway at a makeshift memorial in Clapham, where Everard was last seen. 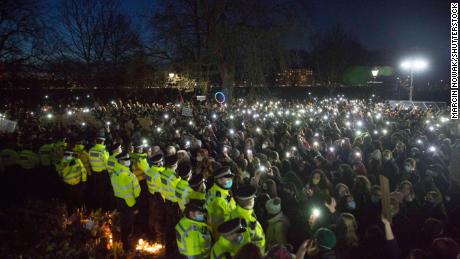 The crowd observed a moment of silence. Some placed flowers and candles, and chanted, “We remember Sarah Everard” and “sisters united will never be defeated.”
As police began urging the crowd to disperse due to Covid-19 restrictions, mourners could be heard chanting “shame on you” and “arrest your own.”
Organizers told CNN that police and local officials have allowed another vigil to be held Saturday evening to commemorate Everard and other women who have been murdered by men. That was held in Brixton, where Everard lived, but most people stayed at the larger gathering in Clapham.
The “Reclaim These Streets” organizers said they will be raising GBP32,000 (approximately US $44,544) for women’s causes, which would also cover GBP10,000 (around US $13,920) of possible fines for the 32 vigils that had been scheduled across the country. 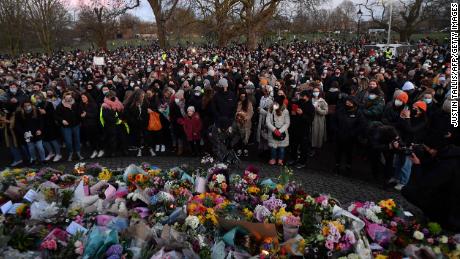 On Saturday, the Greater Manchester Police (GMP) said they supported a vigil that has been planned in Manchester, saying in a statement that “women should never have to live in fear or change their behavior to keep themselves safe on our streets and GMP stands with this message and understands why events were planned in support of it.”
“We understand there are a number of online events as well as a doorstep vigil that have been arranged for this evening and GMP absolutely supports these and encourages our communities to join them — they allow people to stand together over this important matter in a Covid-safe way and in a way which complies with government regulations as they currently stand,” it said.

In the UK, instances of abduction are relatively rare, but new polling indicates that sexual harassment and abuse are not.
Over 70% of women surveyed by UN Women UK said they had experienced sexual harassment in public spaces. That figure rose to 97% among women aged 18 to 24, polling showed. The data, released Wednesday, was drawn from a YouGov survey of more than 1,000 women commissioned by UN Women UK in January 2021.
The organization’s polling also suggested that women have little faith in public institutions to tackle the situation.
“Only 4% of women told us they reported the incidents of harassment to an official organization — with 45% of women saying they didn’t believe reporting would help change anything,” UN Women UK said.
Women are not alone in feeling under threat on the streets; men are more likely to be the victims of violent crime involving strangers and acquaintances than are women, according to the annual Crime Survey for England and Wales, published by the UK Office for National Statistics (ONS).
But government data show that men are far more likely to be prosecuted for acts of violence against both women and men. Over the three-year period ending March 2020, the vast majority of suspects convicted of homicide were male — 93% of the total, according to an ONS report on homicide.

A London Metropolitan Police officer has been charged with the kidnap and murder of 33-year-old Sarah Everard, whose disappearance on a walk home has reignited a national debate in Britain on women’s safety and sexual assault.