The final opinion polls over the weekend point to Benjamin Netanyahu’s Likud party finishing comfortably on top, but also show potential key allies without the necessary public support to make forming a new government straightforward. Like the previous three contests, this one is seen primarily as a nationwide referendum on the country’s longest-serving Prime Minister.
The last twelve months have been arguably the most eventful of Netanyahu’s 15 years as Israel’s leader. Back in the summer, he looked to be on the cusp of annexing large chunks of the occupied West Bank, after appearing to get the green light from President Donald Trump and his “Peace to Prosperity” proposal. Those plans were suddenly shelved in exchange for an eye-catching normalization deal with the United Arab Emirates, quickly followed by similar agreements, known as the Abraham Accords, with three other Arab states.
On the coronavirus pandemic, Netanyahu, like many leaders, struggled to balance public health with economic imperatives, though by making what seems a winning bet on vaccination procurement, Israel’s position looks stronger than most in terms of its emergence from the pandemic.
On the other side of the ledger, his trial on bribery, fraud and breach of trust charges is now formally underway. He submitted his not guilty plea last month and continues to insist it is all a media-led witch-hunt fueled by the inability of the left to beat him at the polls. 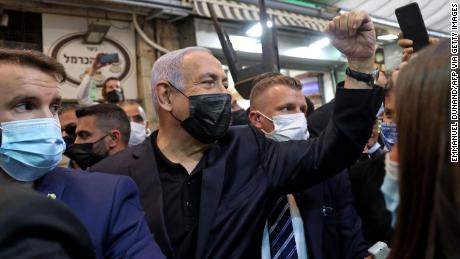 Read More
This time around, the Prime Minister faces a particularly wide array of opponents, and opinion polls suggest as many as thirteen parties could cross the electoral threshold and secure representation in the 120-seat Knesset.
Centrist Yair Lapid, who once served as Netanyahu’s finance minister and was a leading TV news anchor before entering politics with his Yesh Atid (There is a Future) party in 2012, is on track to finish a clear second, according to all polls.
Two other key figures in this election are former defense minister Naftali Bennett, leader of the Yamina party, and Gideon Saar, leader of New Hope. Both are right wingers, seen as ideologically in tune with Netanyahu, but with one clear distinction between them. Saar, like Lapid, has ruled out joining the Likud leader in any government after the election; Bennett has been more circumspect about what he would do, making him this election’s potential kingmaker.
Israeli governments are always coalition arrangements, and so smaller parties can have a decisive impact. Netanyahu will be looking for strong performances from the two main religious parties representing the ultra-Orthodox communities — both say they will remain allied with Likud after the election. In addition, the Israeli leader can feel confident he has the support of the far-Right Religious Zionism party. Polls suggest this grouping — which includes followers of extremist Rabbi Meir Kahane, whose own political party was banned from the Knesset in the 1980s for being racist — is on track to cross the electoral threshold and win four or even five seats.
The election was triggered in December when parliament failed to agree a budget, ending a seven-month power sharing arrangement between Netanyahu and his main rival in the three previous elections, Benny Gantz. The former army chief emerged from the unity agreement, struck during the first wave of rising coronavirus infections, bitterly disillusioned about his decision to join the government. 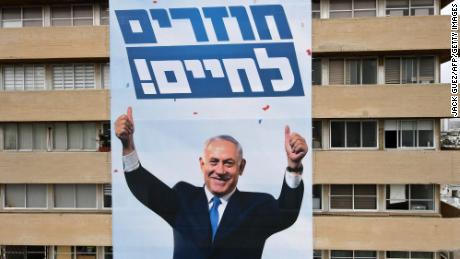 Netanyahu credits himself with bringing Israel ‘back to life.’ Now he hopes his Covid-19 campaign will save his political future
“I never believed Netanyahu, but I was willing to cooperate with him for the good of the country,” Gantz said after the government’s collapse, adding later, “I shook the hand of a serial promise-breaker. I shook his hand, because the State of Israel was at war [with the coronavirus], and I am, above all, a soldier. I was wrong.”
Opinion polls suggest Gantz will pay a heavy political price on Tuesday with his Blue and White party only just on track to scrape back into parliament. If it does cross the threshold, Blue and White will be natural allies of Lapid in an anti-Netanyahu bloc, as would the parties of the center-left and left, Labor and Meretz, assuming they too win enough support. Avigdor Liberman’s Yisrael Beiteinu — with its base in the Russian emigre community and a campaign focused on a strong secular platform opposed to Shabbat restrictions on shopping and public transport — is also firmly opposed to keeping the Prime Minister in office.
One of the more striking aspects of this election campaign has been Netanyahu’s attempts to win support among Israel’s Arab voters. In previous campaigns, he has been accused of trying to suppress their vote; on election day in 2015, he even made a video claiming Arab voters were “moving to the polling stations in droves” — in order to motivate his Likud base to get out and vote. This time, by contrast, he has produced campaign material featuring voters declaring in Arabic their support for “Abu Yair,” the father of Yair, hailing his coronavirus vaccine achievements. Privately, lawmakers from Arab parties admit the campaign has been effective.
The Joint List, an alliance of three mainly Arab parties committed to ousting Netanyahu, looks set to win in the region of eight seats. The United Arab List, which split from the Joint List in February, will hope to cross the electoral threshold with four seats. Its leader Mansour Abbas has taken a maverick stance in this campaign, hinting that he could offer the Prime Minister some form of support in coalition talks in return for financial commitments that would benefit the country’s 20% Arab minority.
Voting closes at 10 p.m. (4 p.m. ET). TV networks publish projected results based on exit polls almost immediately, but it will likely be several days before final results are known. Given that several parties have been polling close to the electoral threshold, it is quite possible that some of them may fail to secure any seats after all the votes are counted, which in turn could have a major impact on the possibilities that exist for the main parties as they look to build a coalition of at least 61 seats.
And if the election doesn’t yield a viable coalition, Israelis could be trudging back to the polls by year’s end.

Israelis are voting Tuesday in the country’s fourth general election in under two years, with no guarantee that this poll will yield a more conclusive result than the previous three.