The town of Palma in Cabo Delgado province was attacked by Islamist insurgents on Wednesday, according to multiple sources contacted by CNN. Witnesses reported seeing bodies in the streets after the insurgents, believed to be affiliated with the terrorist group ISIS, attacked Palma from three directions, Human Rights Watch said on Saturday.
According to several accounts provided to CNN, a convoy of about 17 vehicles left Palma on late Friday afternoon. There were many foreign workers in the convoy as well as Mozambicans. Palma is near a major natural gas project run by the French company Total.
A regional security source based in Pemba said the convoy was ambushed and only seven vehicles reached safety. However, several people in those vehicles were killed or injured. The other vehicles and their occupants remain unaccounted for, source said. Another source — who works in the area and has direct knowledge of the logistics operation — told CNN that at least eight vehicles in the convoy were still missing. When asked how many people were still unaccounted for, the source said at least 50, adding it was a “conservative estimate.”
The accounts provided to CNN say the convoy left a hotel on the northern outskirts of Palma heading towards the large Total natural gas project on the Afungi Peninsula, some 15 kilometers away. But it had no air cover from helicopters that had been deployed to the area by a South African military contractor.
Read More
The security source in Pemba also said attempts to reach the nearby coastline with rescue boats had been fruitless, after the vessels had come under fire from the militants, known locally as Shabaab, and with no links to the Somali group of the same name. However, some people who had managed to escape Palma were subsequently brought from a nearby port to Pemba, some 200 kilometers to the south, on board a ferry. They included about 120 foreigners.

Some in the town remain “out of reach”

Many people who have been living and working in Palma remain out of reach.
In a statement to CNN, the US embassy in Maputo said it was “aware of one U.S. citizen who was in Palma, but has been safely evacuated,” adding that it was in touch with “Mozambican authorities, international missions, and the private sector regarding the ongoing situation and humanitarian relief efforts.”
“The U.S. Embassy in Mozambique continues to monitor the horrific situation in Palma District,” it also said. 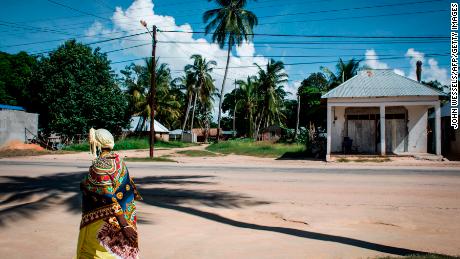 US Embassy warns of ‘imminent attacks’ in Mozambique
One woman waiting at the port in Pemba for news of her brother had been unable to reach him by phone. “It’s heart-breaking, I don’t know… You lose someone and you don’t know where they are, what condition they’re in, that person is not reachable,” she told a journalist working with CNN.
At least two coaches carrying evacuees later arrived at Pemba airport for a flight to the capital, Maputo.
There has been no official word from the Mozambican government on the fighting since Thursday. It’s not known whether security forces have gone to the area. The insurgents launched a three-pronged attack on Palma on Wednesday. Regional security sources say they used explosives to target bank branches in Palma. They say that some of the insurgents wore military uniforms.
Human Rights Watch and others say that in the early stages of the assault witnesses described the militants as attacking and killing local people in their homes and on the streets of Palma.
Total announced Saturday it was suspending plans to restart operations in the Afungi Peninsula, which were previously halted after insurgent attacks in January.

The attempted evacuation of people trapped during an attack in northern Mozambique by Islamist militants has led to multiple casualties, with dozens of people still unaccounted for, according to reports, in what the US embassy in Maputo is calling a “horrific situation.”