The heaviest casualties were in an industrial suburb of the largest city Yangon, where military and police opened fire on unarmed protesters, killing at least 22, according to the advocacy group the Assistance Association for Political Prisoners (AAPP), which said Hlaingthaya district “became like a battlefield.”
In one unverified image, a protester can be seen huddling under a makeshift shield as he holds onto the shirt of a fallen fellow demonstrator.
At least 16 people were killed in other regions around the country on Sunday, including in the second city of Mandalay and in Bago, where state media said a police officer had died of a chest wound after a confrontation with protesters, Reuters reported. This is the second policeman reported dead in the protests.
The weekend’s fatalities bring the death toll since the coup to at least 126 people, according to the AAPP. 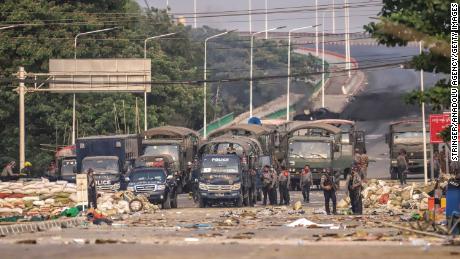 Read More
The Chinese Embassy in Myanmar said several Chinese-funded factories were smashed and set ablaze in Yangon’s industrial zone during protests Sunday. Chinese citizens were also injured, according to the embassy
It is unclear who the perpetrators were and no group has claimed responsibility for the fires.
“China urges Myanmar to take further effective measures to stop all acts of violence, punish the perpetrators in accordance with the law and ensure the safety of life and property of Chinese companies and personnel in Myanmar,” CGTN quoted the embassy statement.
Anti-coup protesters have been suspicious of China, with frequent demonstrations targeting the Chinese embassy in Yangon and protesters accusing Beijing of supporting the coup and junta.
While China has not outright condemned the military takeover, it backed a United Nations Security Council statement saying it “strongly condemns the violence against peaceful protestors” and called on the military to “exercise utmost restraint.”
In its statement Sunday, China called on protesters in Myanmar to express their demands lawfully and to not undermine bilateral ties with China. 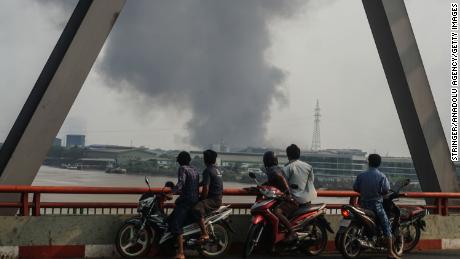 Following the bloodshed, the military junta imposed martial law in Hlaingthaya, one of the city’s biggest districts that’s home to many poor factory workers, according to state-run news channel MRTV. Local media reported that martial law has also been declared in Yangon’s Shwepyithar district. On Monday, the military declared martial law in a further four Yangon townships of North Dagon, North Okkalapa, South Dagon and Dagon Seikkan — areas where most of the city’s factories are located.
Martial law under the junta’s regime means the military commander of the Yangon region is given “full administrative and judicial authority” in districts where martial law is declared, according to local media outlet Myanmar Now.
Mobile networks remained “disabled nationwide” despite restoration of internet connectivity on Monday following a shutdown for the 29th consecutive night, according to internet monitoring service NetBlocks. Protesters and journalists have relied on their mobile phones to live stream demonstrations and document police crackdowns.

‘People have the right to defend themselves’

As protests continue throughout Myanmar, the leader of a group of lawmakers ousted by the military has vowed to pursue a “revolution” to overturn the ruling junta.
Speaking publicly for the first time Saturday, Mahn Win Khaing Than, who was speaker of the upper house of Parliament before the coup, said in a video address on Facebook, “This is the darkest moment of the nation and the moment that the dawn is close.”
Mahn Win Khaing Than, along with other ousted legislators from the ruling National League for Democracy Party (NLD), remains in hiding. With civilian leader Aung San Suu Kyi and President Win Myint under house arrest, former lawmakers have formed a parallel civilian government — called the Committee Representing Pyidaungsu Hluttaw (CRPH) — that are pushing for international recognition as the rightful government. 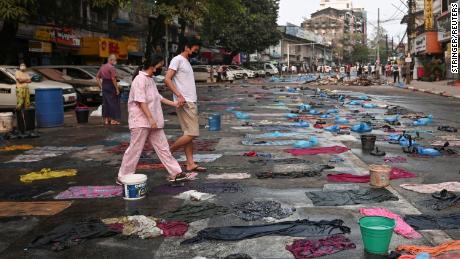 Why is Myanmar protesting?

Protests have been ongoing for more than a month across Myanmar after the military seized power in a coup on February 1, detaining democratically elected leaders, ousting the ruling government, and establishing a junta called the State Administration Council.
The military, headed by coup-leader Gen. Min Aung Hlaing, justified its takeover by alleging widespread voter fraud during the November 2020 general election, which gave Suu Kyi’s party another overwhelming victory and dashed hopes for some military figures that an opposition party they had backed might take power democratically.
The now-reformed election commission denied there was any evidence mass voter fraud.
It was only the second democratic vote since the previous military junta began a series of reforms in 2011, following half a century of brutal military rule that plunged Myanmar, then known as Burma, into poverty and isolationism. 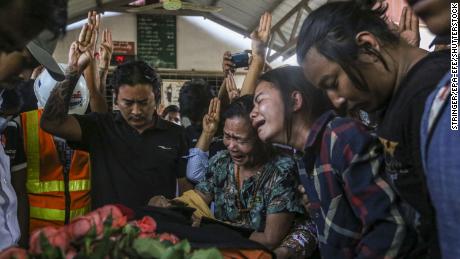 Protesters are demanding the military hand back power to civilian control and are calling for the release of Suu Kyi and other government figures. Myanmar’s many ethnic groups, which have long fought for greater autonomy for their lands, are also demanding the military-written 2008 constitution be abolished and a federal democracy be established.
As well as protests, a civil disobedience movement has seen thousands of white- and blue-collar workers, from medics, bankers and lawyers to teachers, engineers and factory workers, leave their jobs as a form of resistance against the coup.
In recent weeks, the military has stepped up its response to the protests, launching a country-wide systematic crackdown in which security forces have opened fire on protesters. Amnesty International said the military was using increasingly lethal tactics and weapons normally seen on the battlefield against peaceful protesters and bystanders, and that troops — documented to have committed human rights abuses in conflict areas — have been deployed to the streets. The UN special rapporteur for human rights in Myanmar, said the military’s “brutal response” to peaceful protests is “likely meeting the legal threshold for crimes against humanity.”
Despite the danger, thousands of young protesters have continued to defy the military. The demonstrations are dominated by young people who have grown up with a level of democracy and political and economic freedoms their parents or grandparents didn’t have, and say they are fighting for their future.