Resignation letters were released by now ex-ministers throughout the day, with Former Defense Minister Fernando Azevedo e Silva releasing a statement saying he had “preserved the Armed Forces as a State institution.” He will be replaced by Army General Braga Netto, the former Government Minister.
Former Attorney General Andre Levi, who refused to sign Bolsonaro’s lawsuit to lift three state governors’ lockdown orders, also published a letter of resignation. He will be replaced by Andre Mendonca, Brazil’s former Justice Minister, whose former seat at the Justice Ministry will now be filled by Federal Police Chief Anderson Torres, a friend of the Bolsonaro family.
The former Secretary of State, General Luiz Eduardo Ramos, was appointed Government Minister. Flavia Arruda, a federal deputy, is now the Secretary of State.
And the former Foreign Affairs Minister Ernesto Araujo has been replaced by diplomat Carlos Alberto Franca.
Read More
These changes appear to put several army generals closer to Bolsonaro in more strategic positions, following several other replacements at the top of Brazil’s federal government this month.
Marcelo Queiroga, Brazil’s fourth health minister since the beginning of the pandemic, was sworn in quietly just last week, replacing Eduardo Pazuello. A new Covid-19 crisis committee including state officials was also recently formed to confront Brazil’s devastating coronavirus resurgence.
On Saturday, the country’s daily death toll surpassed 3,000 for second day in a row, and on Thursday night, Brazil’s Health Ministry reported the gruesome figure of more than 100,000 new Covid-19 cases confirmed in a single day — the country’s highest such figure since the pandemic began. 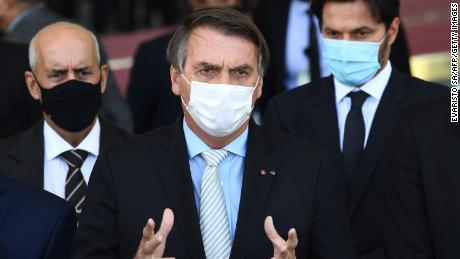 Signs of collapse across Brazil as Covid spirals out of control. Bolsonaro seems to have little response
So far, a total of 312,206 people have died in the country from the virus, and 12,534,688 have been infected, according to official data.
Criticism of Bolsonaro’s handling of the pandemic has escalated in recent weeks as the new coronavirus variant P.1 rips through the country, seriously sickening even younger people.
The President has yet to take significant steps to try and implement a coordinated national response. He delivered a televised address to the country on Tuesday night, saying 2021 would be the “year of the vaccine” — a change in tune from his own claims last year that the Pfizer dose might cause women to grow beards and that a Chinese-made vaccine was not worth buying
But critics derided the 3-minute speech as a half-hearted attempt at a public-relations rescue on a day where Brazil set its own record for most coronavirus deaths recorded in a single day.
Bolsonaro has refused to endorse lockdown measures, citing the health of the economy and the personal liberty of citizens. For now, most restrictions on gatherings have been put in place by individual state governments; Rio de Janeiro, Sao Paulo, and Minas Gerais are among the states that have implemented nightly curfews. A recent lawsuit filed by the Bolsonaro administration to lift those restrictions was rejected by the Supreme Court.
Calls for him to change tactics are growing louder. More than 500 influential finance individuals last month published an open letter pleading for more efficient containment measures so that the country’s economy can recover.
But Bolsonaro so far remains unwilling to entertain challenges to his approach toward the virus — an attitude underscored on Monday by his selection of familiar faces for top ministerial positions. As he said last week during an official government ceremony on education, “We must fight against the virus and not against the President.”
This is a developing story and will be updated.

Brazilian Defense Minister Fernando Azevedo e Silva has resigned from his position in a surprise move.