In the coastal city of Rio de Janeiro, intensive care units are 95% full. Fifteen other state capitals are similarly verging on collapse, with ICU occupancy over 90% — a deluge of hospitalizations that has accompanied a sharp rise in Covid-19 cases in the country.
While Covid-19 cases are beginning to plateau or decline in many countries, Brazil is reporting record daily numbers. Just on Wednesday the country saw its largest daily jump in cases since the start of the pandemic — 90,303 new cases.
“Here it became a war against the President. It seems that people only die of Covid,” Bolsonaro, who wasn’t wearing a mask, told supporters outside the presidential palace on Thursday.
“The hospitals are 90% occupied. But we need to find out how many are from Covid and how many are from other illnesses,” he said.
Read More
Many state health departments in Brazil do show data for both ICU capacity dedicated to Covid-19 and to other illnesses. 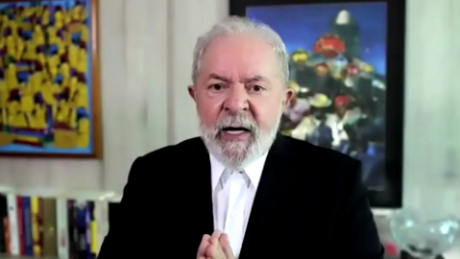 Exclusive: Former Brazilian leader Lula leaves door open for return as he slams leaders’ pandemic response
On Thursday, Brazil’s health ministry reported 2,724 more people had died from the virus that day, bringing the total to 287,499. Those numbers make Brazil the second worst-affected country in the world in terms of case and deaths numbers, after the United States.
Bolsonaro, who has long downplayed the gravity of the pandemic, also said Thursday he regrets the country’s deaths, but questioned the efficiency of lockdown measures, which he has resisted imposing.
“Of course, we want a solution and regret any death, but why did the lockdown exist? You are seeing the population suffering from unemployment. Introduce me to a country where the fight against the Covid is working,” Bolsonaro said.
As cases surge, the Brazilian President is facing fierce criticism from citizens, potential political rivals, and local officials across the country, many of whom have demanded that Bolsonaro step up federal action.
Former President Luiz Inacio Lula da Silva, who has not ruled out running for office again in 2022, has slammed the current administration’s response to the pandemic, saying Thursday that “there is no control in Brazil.”
Over the weekend, a joint letter by the country’s governors called on the President to restrict the operation of airports, ports, highways, and railways in the country, among other measures. Many have already imposed local lockdown measures. 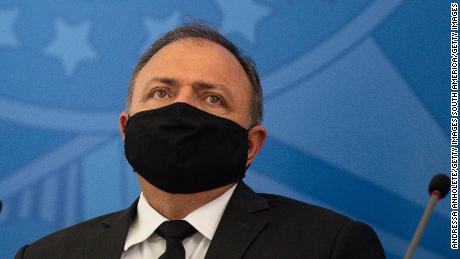 Brazil will get its fourth health minister since the pandemic began
The National Front of Mayors (FNP) also sent a letter to the president and the health ministry Thursday asking for “immediate measures” to address critical shortages in supplies and medicines, including oxygen and sedatives.
“It is unreasonable for people, Brazilian citizens, to be driven to such desperate deaths by ‘drowning in the dry’ or to have to be tied up and maintain consciousness during the delicate and painful process of intubation and throughout the period people are kept intubated,” the letter says.
Brazil’s Federal Pharmacy Council (CFF) says the current flood of Covid-19 cases raises “extreme concern” as there is also evidence of shortages of neuromuscular blockers, and other drugs used in intensive care, like Midazolam, essential for humane and safe intubation.
The Council for Health Secretaries has confirmed to CNN that those medications are at a critical level and could run out within 20 days.

More than 45,000 people have been killed in Brazil by the pandemic in the past month, but Brazilian President Jair Bolsonaro says there’s a “war” against him personally.