A year ago, air travel came to a near halt, leading to a glut of rental cars. Rental companies parked their cars in unused lots at ballparks around the nation, and cars were rented for a fraction of their normal price — or sold as used cars. The industry sold off more than a half a million cars, about a third of their combined fleets, just to generate cash they needed to survive the crisis.
Following a year of deep losses, rental car companies have been unable to rebuild their fleets, especially with auto plants shut by a shortage of computer chips needed to build cars.
So this spring’s rebound in spring break travelers has led to a severe shortage of rental cars in vacation hotspots, resulting in sky-high prices for vacationers.

Read More
Last weekend in Florida, 18 of the state’s 20 largest airports were totally out of cars, according to Jonathan Weinberg, the CEO of AutoSlash, a site that helps car renters find the lowest price. He said cars were also sold out at the airport in Phoenix and much of Hawaii. He expects the same to be the case this coming weekend, and most upcoming weekends into the summer for those who wait to reserve a car.
“We’re looking at rates of $500 a day in some places,” he said. “Last spring we were seeing $5 a day rentals in Hawaii. You’d never seen that. Now you’d kill for a car for $300 a day.”
A search of car rental sites Wednesday showed a Kia Rio, a sub-compact car, going for $300 a day in Orlando, next week. On Maui, Hawaii, the only rental available next week is a Yukon for $500 a day.
The shortage is pronounced in vacation destinations. It’s still possible to find cars elsewhere, such as Omaha, for about $300 a week, rather than a day.
“Rental car supply is normally tight around spring break, but not like this,” said Chris Woronka, analyst at Deutsche Bank who follows the industry. “Normally you have 30% more cars.”
He predicted a number of spikes in travel prices above 2019 levels as travelers start to return, especially for those who don’t book in advance. The providers — airlines, hotels or car rental companies — don’t want to bring capacity back too fast only to see travel fall off again.
“I do think you’re going to have this period of readjustment,” he said. “During this period of pent-up demand for travel but not enough supply, you should expect prices would be higher than in the past. The travel providers are testing the waters. We’re in uncharted territory. They’ve all lost a lot money in the last year.”
While airlines grounded planes and hotels have closed some floors or temporarily shut in some cases in 2020, it was easier to bring that capacity back online with rebound in travel.
“Rental cars are an extreme example,” Woronka said.

Car rental companies declined to comment directly on the prices or their supply of vehicles, but they confirmed that the situation is extremely tight, and recommend that customers book well in advance of their travel.
“There are challenges in new vehicle supply, due in part to the recent global chip shortage impacting new vehicle availability,” said Sara Miller, spokesperson for Enterprise Holdings, which includes the Enterprise, Alamo and National car rental brands. “We are working closely with our partners to continue to add vehicles to our fleet … [and moving] vehicles where possible to support regional spikes in demand.”
Hertz, which is in the process of trying to win court approval to emerge from bankruptcy, also includes Dollar and Thrifty rental car brands. It sold more than 200,000 of its US fleet last year, about 42% of its supply, leaving it with just less than 300,000 US cars in the fourth quarter. Rival Avis Budget (CAR) sold 25% of its fleet. Privately held Enterprise does not report results.
“We’re seeing a surge in demand for leisure travel in vacation destinations across the industry, particularly around peak travel times like spring break. Given where the industry was during this time a year ago, we’re happy to help travelers return to the road safely,” said Lauren Luster, spokesperson for Hertz. “Because of the spike in demand and tighter fleets across the car rental industry, availability may be more limited.” 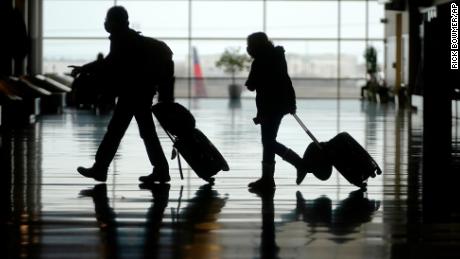 Ignoring CDC warnings, more than 1 million passengers have flown from US airports for 10 straight days
The rental car companies have started buying cars again, but after losses last year and air travel still only about half of what it was in 2019, those purchases are at a slower pace than pre-pandemic levels. Purchases of new cars by the rental companies were down more than 90% in May and June as last year. They’ve now purchased nearly 400,000 cars in the last five months, but down about 40% from its year earlier purchases, according to data from Cox Automotive.
“The car rental companies would rather not have enough supply and see some higher prices than become overfleet again because they overestimated the rebound,” said Woronka.

Here’s what you need to know if you’re planning on a spring break trip to Orlando next week: Renting a car — if you can find one — could cost you at least $300 a day. That’s possibly more than you’ll spend for air fare, hotel rooms or tickets to theme parks.